You can die!, I can break your teeth! 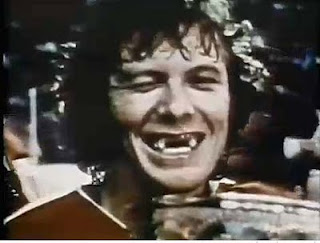 One of my colleagues advises every patient of this. He has a thick Czech accent so you have to be there.

Dental damage is of course an inherent risk of anaesthesia. I have never broken or chipped teeth but I have at least 10 years to go so I know it is going to happen. I am however becoming aware of how frequently (by which I mean a couple of times a year) it happens because as department head I seem to find out about it. Our hospital has a very active disclosure policy and usually on the discovery of any complications, the patient is inundated by risk management people. The result of this is often that the patient starts to see dollar signs. This usually leads to a claim against the hospital once the patient goes to his dentist. I am beginning to believe that when a dentist hears that teeth were damaged during surgery, they too see dollar signs.

I shouldn't comment on events so recent but the following case is so silly and so outrageous that I just have to post it because in 2-3 years I will have hopefully forgotten about it.

I got an email from our patient concerns office copied to the medical director. The story is:

A patient had surgery at our hospital. Some time postoperatively he had a cardiac arrest. A code was called and someone attempted to intubate. In our hospital, that would usually be an RT. The intubation was difficult, anaesthesia was called and fortunately they weren't tied up with some ortho "emergency" and intubated the patient with some difficulty using a Bougie.

The patient survived and woke up in ICU. Most people would be relieved and thankful but however the patient also woke up with..... a broken tooth. Which they want someone to pay to fix.

As I told patient relations, I couldn't see from the chart they gave me who chipped the tooth, I suspect it was the RT. As I told them our medical protective association fights most dental damage claims no matter how small just on principle but if in fact the RT was the culprit, the hospital might be liable. I also mentioned I thought that any judge would probably award a tiny amount of damages for having one's teeth broken while one's life was being saved. Maybe I underestimate our judiciary.

This reminds me of another case on which the statute of blogging limitations has expired.

A patient presented for some type of day surgery procedure requiring intubation. She had veneers which the anaesthesiologist noted and checked off on the record that she had warned the patient (maybe not in a Czech accent). Surgery was uneventful, the recovery room nurses did not notice any dental damage. Someone between recovery and day ward, her veneer fell off. Worse still, it ended up in her stomach (better than her lung anyway). Naturally her dentist wanted 5 figures to fix it. Not happy with her prospects in the civil law system she went to a higher court.

So it was then that I got a phone call from the medical director asking if I would go on TV and discuss this case. "Are you fzcking crazy?" I was thinking but there was a temporary disconnect between my brain and mouth and anyway I like being on TV. First of course I had to meet with the risk management people to discuss what I should say and what I shouldn't say. I actually took at media relations course once and I learned that it is important to stick to the message. My message was going to be "dental damage is an inherent risk of anaesthesia no matter how competently performed, discuss this with your anaesthesiologist".

For authenticity they wanted to shoot the segment in an operating room, so we chose our block room which has a machine. I put on my greens, my favourite OR cap and got a selection of laryngoscopes, airways and suctions to demonstrate all the ways your teeth could be broken. I thought the interview went well, I stayed on message and I thought I had done an educational service to the community. The risk management lady who sat off camera the whole time agreed.

I never asked when they were airing it and I don't watch the 6:00 news (especially Global) so I only learned about it a couple of days later when people told me they had seen me on TV. (America's Most Wanted? I asked). Fortunately Global archives their broadcasts on their website so I was able to see my performance.

It was not pretty.

They had taken the patient's side. The show started out showing the outside of the hospital from a curious oblique with the voice over, "they broke her teeth during surgery and now they don't want to pay". My interview was heavily edited and I was usually cut off mid sentence so everything was out of context. They at least acknowleged that it wasn't me who broke her teeth.

I should learn but I suspect I would probably make the same mistake again.
Posted by Bleeding Heart at 12:57 p.m.

Funny that's what Sarah Palin said about Katie Couric after their infamous interviews during the last presidential election.

what a heartwarming story of a grateful patient. oh wait...

No one, ever, should agree to an interview that is not being aired live and in full. By the time editors get through with recorded interviews, the interviewee can be made to say just about anything.

This is why, for the past 20 years, US Executive Agencies simply refuse to be filmed for programs like '60 minutes' as a matter of policy.

My front teeth were broken by someone pushing down on an apparatus that was supposed to be delivering oxygen to me in the ICU after a routine surgical procedure. I couldn't see the person but I "came to" with someone mashing my face and mouth very hard as they reached above my head to adjust something I couldn't see. I fought their hand away. Two days later, my permanent bridge fell out when I got my first bite of solid food - a piece of very soft bread. Naturally, the hospital doesn't want to pay. But why should this be my loss?