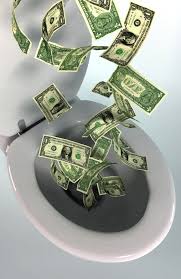 We had a little breakfast presentation by the Sugamadex people last Friday.  Not a bad breakfast and an okay talk by one of their scientific people, a little dry.

Unfortunately any discussion of a drug basically comes down to, "can we afford it; will the hospital put it on formulary?"  The answer came about 50 minutes into the talk, after we had finished our breakfast and were on our second cups of coffee.  The answer was $100.  That is for the smallest dose, the dose for mild-moderate block, the dose that some of us depending on circumstances don't even reverse.  If you go for deep block, like when your resident listens to the surgeon's whining and gives rocuronium while they are closing, multiple by two.  If you want to immediately reverse rocuronium like for example when you give 50 mg to the guy with no chin and realize you can't intubate him (and can barely bag him), you are talking serious cash.

Now neostigmine is not the nicest drug in the world.  I consider it the most dangerous drug in my drug cart.  Surprisingly pharmacy who insist on putting high alert stickers on my midazolam compartment haven't figured that out yet.  It is considerably cheaper however although the price is said to be going up due the Merck buying the licences off all the generic companies who used to make it.

Sugamadex is with a few little wrinkles a better drug than Neostigmine, just as a Ferrari is a better care than my VW Jetta.  My VW Jetta gets me to work on time however.

I have no idea how much it costs to make Sugamadex, even taking into account the inflated R+D costs companies claim they have to pay.  I suspect it isn't anywhere near $100.  Currently they are selling almost no drug at all in Canada.  The question comes, is there a price where the company can make a profit which balances with the hospital paying a little bit more for what is a better drug, which might actually save money by shortening recovery room stays and reducing complications.  I should have asked but I bet I wouldn't have got a straight answer.

Incomplete reversal of muscle relaxants seems to be getting a lot more attention in the literature and at meetings, some of which I suspect is being driven by the makers of Sugamadex and their stable of tame physicians who can write articles and speak at meetings.  I trained at the tail end of the pancuronium-curare era, which gave me a healthy respect for muscle relaxants.  The problem is of course, I suspect we see more incomplete reversal now than we did with pancuronium, if only because people have lost their respect for muscle relaxants.  I have learned that adding a muscle relaxant probably increases your complication rate.  I do a lot more cases with a LMA spontaneously breathing now, I still use sux and quite often if I am just intubating to protect the airway, I don't bother with a non-depolarizing agent, unless the patient is bucking or the surgeon is whining.   Even when using a non-depolarizer, I tend to be sparing in how much I use and quite often if I don't need muscle relaxation have the patient spontaneously breathing or on pressure support by the end of an hour.

The Sugamadex people have cottoned on to the fact that hospitals are not about to pay $100 for a drug, at least not for an anaesthetic drug, no matter how good it is.  The spin last Friday, was getting it indicated for high risk populations like the frail elderly, sleep apnea and high BMI patients.  Probably a good idea, however unless the hospital polices it, you are going to get indication creep.  If you need it for the BMI 45, what about the BMI 44 and so on.  Of course regulation could lead to you trying to call the on call pharmacist at 0400 because you want to use Sugamadex.  Neither very good options.

I was talking later that day with the surgeon and was discussing our morning rounds.  He observed that where a drug that cost $100 used to be considered expensive, now $1000 to $10000 is not unusual.
Posted by Bleeding Heart at 11:27 a.m. No comments: