Funeral for a Friend

Sitting alone in my favourite cafe, just finished my cinnamon bun, sipping on my latte. Nice Sunday morning, a little cool but sunny. I rode my bike over to my favourite cafe. Nothing really in the free community paper and somebody is hogging the local paper so I get out my I-phone and check my messages. Not really expecting much on Sunday. I notice a message from one of my old medical school classmates and the subject is another medical school classmate. Oh shzt I am thinking as I open the message. Sure enough, Dave my old friend from medical school is dead.

Everybody in my medical school class is now safely over 50, so it is not surprising that people are going to drop off. You just never thought that it would be somebody you knew and liked really well.

I didn't really know many people in my medical school class from my undergraduate years. A few people I recognized from labs or smaller classes, nobody I was really that close to. I hardly even knew anybody who had ever been to medical school. It was a complete mystery to me. I had this impression going in that I was looking at 4 very hard and boring years.

I was assigned to the same group as Dave in anatomy. Him, me and two others on a cadaver. I remember pulling off the case cover, peering at the unnatural brown skin, the face covered with a mask still. We had a scalpel and a dissection manual. The other two people looked a little green. "Should I go first or should you?" said Dave. I can't remember which of us actually made the first cut but one of us did and that was how our group got started in anatomy. I remember thinking how serious and mature a guy Dave was.

I am not a really good judge of human nature.

Dave turned out to be the most irreverent guy I have ever met. He had a warped sense of humour that complemented my warped sense of humour. He loved puns, the sicker the better. We spent the 6 months of dissection mostly bent over in stitches at some joke that he had usually made. We did tasteless pranks like dropping fat into people's lab coat pockets as they passed our table. Anybody who visited our table to look at our dissection, was in for an insult. Our anatomy professor cautioned our class about elbowing people away from our dissection; we said we just gave verbal elbows.

One of the best attributes of a friend is someone who will tell you when you are being stupid. In that respect Dave was the best of friends to me. Dave didn't suffer fools gladly, there were classmates Dave didn't like very much; he was always very coldly polite to them. In fact if Dave wasn't rude to you it meant he didn't like you.

In between 2nd and 3rd year medical school Dave and I did rural doctor electives in adjacent towns. We got horrendously drunk together two nights in a row at the Kimberly Beer Festival and after our electives ended we visited a friend of Dave's at Invermere after which we travelled in a convoy my VW Rabbit chasing his Datson pickup to his home town where I stayed at his house for a couple of days before returning to Vancouver.

Dave was a good friend to a lot of people which I realized when I read the tributes to him after he died and spoke to the classmates who went to his memorial service. Everybody had a story about some road trip or something else that they had done with Dave. Even now when I think of some stupid pun or joke or intentional mispronounciation of a word; quite often I heard it first from Dave 25+ years ago.

I saw Dave less in our clinical clerkship year and we interned in different cities. I was surprised to hear that Dave was going into Urology. We had often talked over coffee about surgeons and how unscientifc most of what they did was. He finished his residency and went to practise in his hometown which he really loved and which was unfortunately where he died.

Dave came to my wedding but after that I only saw him every five years at our class reunion and he missed the last two due to illness or death in his family. Periodically he would phone me up out of the blue. The last time was on provincial election day to remind me to vote Conservative. Dave had become more conservative and bitter about politics since starting in practice. He had also become a gun collector and was adamantly against the gun registry (it is ironic that he died thinking the gun registry had been abolished in Canada only to have it resurrected weeks after his death). None of this stopped him from discussing his points of view in a civil fashion.

A couple of weekends ago I was driving down for his memorial service and my wife who was keeping me company and who I met after medical school asked me if I could tell her some stories about Dave. I kept on for about an hour with story after story. Some of them I hadn't thought about for years. The tears were rolling down my eyes, I couldn't figure out whether I was laughing or crying. After about every story, my wife said, "If you get asked to speak at the memorial you are not telling that one."

I really can't figure it out.
Posted by Bleeding Heart at 3:49 p.m. No comments:

Dropping my son off University

I dropped my youngest son off at University yesterday. Unfortunately my oldest son has so far ignorred all my hints and is attending University in town and living at home.

I was trying to visualize my first day at University. Then I realized it was almost 35 years to the date. Holy shzt how did I get that old? Mine was a little different. I loaded all my stuff in my backpack and took the bus over to Vancouver and then another bus to UBC from where I walked to the residence. My parent brought over my stereo and record collection (remember records?) a week or so later.

Moving in a day is a much more choreographed event now than 35 years ago. There is a way bigger parental presence. Parental presence 35 years involved dropping off your kids at residence or in the case of my parents driving me to the bus depot. Now the day is built around the parents with an afternoon of "classes" for those interested. I suppose we are paying for the whole affair.

My wife was tearful even though this son has been living away from home for the last four months albeit in our dacha. My son even appeared nervous. I reassured him.

"I spent 7 years in University", I told him, "They were the best 7 years of my life. It goes downhill after that." And I meant it.

I hope that inspired him.
Posted by Bleeding Heart at 12:17 p.m. No comments: 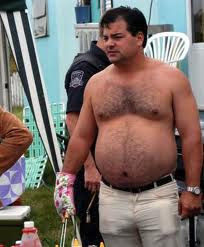 Live and learn. Remove foot.
Posted by Bleeding Heart at 11:42 a.m. No comments: