As I once mentioned, I used to read science fiction but that was almost exclusively Arthur C. Clarke and the recently departed Ray Bradbury whose every work I devoured as a teenager either in books taken out from the library or paperbacks purchased with my allowance.  I grew up, stopped reading science fiction and hadn't read anything from him for years. 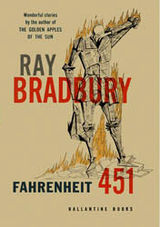 Calling Ray Bradbury a science fiction writer too narrowly compartmentalizes him.  Many of his short stories were not even science fiction, others were fantasy, a lot of them defied classification. It is unfortunately his connection with science fiction which has prevented him from being considered among the top American writers of his time.

Many people were exposed to Bradbury through being forced to read the Martian Chronicles in junior high; a good book if not necessarily my favourite.  It was his short stories which were the most masterful (the Martian Chronicles is a collection of somewhat related short stories).  His story, "A Sound of Thunder." about the perils of time travel stands out; this has been made into at least one bad movie which I saw riding home on the bus about a year ago.  Of course Fahrenheit 451 is a work that should be required reading  and a vision of society that 50 years later is becoming a bit too close for comfort.

About a year ago walking through Chapters during an exceeding quiet day on call, I saw a copy of his collection of essays, "Too Soon from the Cave, Too Far From the Stars" which I brought as my on-call book.  I really hadn't bought a book by him since the 1970s.  Sadly I rarely pick it up at work.  I did learn a lot about him especially his career as a movie writer which I never knew about.  I must get around to finishing it.

It is sad that Bradbury is no longer with us.  I hope the large body of work he left will remain and be read.
Posted by Bleeding Heart at 9:53 p.m. No comments: