One of my oldest memories is the Christmas of 1959.

Christmas, 1959, was the Christmas I had measles.  I still remember seeing pictures of me at Christmas in my pyjamas with a blanket wrapped around me which was, then and now, all you could really do for measles.  I didn't suffer any ill effects and it wasn't until 20 years later in Medical School that I learned about all the bad things that could have happened to me.

As an aside, I have actually seen cases of measles in Canada.  One year, an entire cohort of children got vaccinated with a bum batch of vaccine which meant about 5 years later we had teenagers all the same age presenting with fevers and rashes and I finally got to see Koplik's spots.  All of the cases I saw were mild suggesting there was partial immunity.

By that time vaccination existed for polio, diphtheria and tetanus all very nasty diseases.  We were not that far removed from the polio epidemics of the early and mid 1950s.  We were constantly reminded of it by the kids in wheelchairs and the kids with leg braces some of whom attended school with us.

Diphtheria is of course a really nasty disease, thankfully as a physician primarily working in the developed world, I have never seen a case.  I do remember reading in Kipling's autobiographical 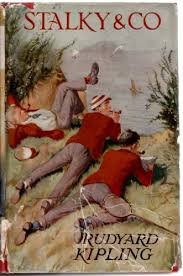 "Stalky and Co." how the headmaster saved a child with diphtheria's life by doing some sort of 19th century intubation or tracheostomy.  Not sure whether this was based on a real incident or just something Kipling thought up.  Tetanus I have seen, usually in older adults some ending up on ventillators some not, at least one dying from it.

I remember going for my vaccinations as a toddler.  My mother would take me to the public health unit where a nurse would paint a rabbit on my arm with mercurochrome and stab the rabbit with a needle.  It still hurt although the ice cream cone afterwards almost made  it worthwhile.  Later, I get the Sabin vaccine which came on a sugar cube.

Vaccinations took place in the schools in Grades 5 and 10.  I believe it was possible to get a note from your parents exempting you but I don't think anybody did.  Why would they?  As I mentioned, we still had reminders of the polio epidemics all around us plus a lot of our parents had had a sibling, friend or classmate die of an infectious disease.

Vaccines for measles, mumps, rubella didn't exist when I was a child so I got to have them all along with chickenpox.

I got mumps at 3 or 4 which I remember as not all that bad, again treated by wearing pyjamas during the day.  I do remember my older brothers who got it the same time as I did were a little sicker.  Mumps has a lot of adverse consequences although more in adults.

Pertussis or whooping cough I got at age 6.  I don't know if I even missed school.  I did have to miss the swimming pool part of a friend's birthday party but not the dinner and ice cream after.

Chickenpox came at age 7, keeping my out of school for a few days (although this time I didn't have to wear pyjamas) and postponing my father's home made haircuts which I hated.  Chickenpox as I found it in medical school is highly contagious, one of my classmates who had never had it spent less than a minute in the door of the room of a child with chickenpox contracted it which means he wasn't allowed on the wards until the infectious disease department deemed him fit to do so.

Rubella I didn't get until age 17.  It was again a mild disease, fever and myalgias and I stayed away from school for a week or so.  Rubella of course can cause congenital malformations and I could potentially have infected somebody something I still wonder about.  Rubella was still fairly common when I was in medical school.

While living in university residence in 1976, I came down with a very severe flu, which years later I figure was probably the H1N1 strain, then called swine flu.  I missed a couple of days of classes and basically crawled to classes for another few days.  I have not ever been so sick.  I never sought medical attention, some people with the same thing who did, were promptly hospitalized.

If it appears I am making light of all the vaccine-preventable diseases I had as a child, I am not.  I was shocked when in medical school I learned what could have happened to me as a child.  I often wonder how my mother who had been a nurse and who knew of the awful consequences of these diseases kept calm with sometimes 3 children sick with something.  As I have pointed out, this was still in the early antibiotic and vaccine era and many adults then had had somebody close to them die from an infectious disease so there may have been a fatalism that helped them get through. That same experience of premature death was why the parents of my generation embraced vaccines so enthusiastically.

We of course did a lot of things in the 1960s which we would never do now, like not wearing seatbelts and I like to think that as a society we have evolved. I continue to be disappointed.
Posted by Bleeding Heart at 3:23 p.m. 1 comment:

I have been reading for some time now about the profiling of blacks and other visible minorities some just a hassle and some tragic.  I often think, how can the police be so stupid?   Then I thought about what happened to me 30 years ago and how it made me feel.  Now I didn't get arrested, didn't get frisked and suffered no consequences (one of us did which I will explain below).
The summer before I started medical school I was working for the forest service in Wells BC.  Nice little town, you should visit there; I haven't been back, for no specific reason.  There were 4 of us working up there and by accumulating overtime hours, which as casual staff we were supposed to take as time off, we were able put together a 4 day weekend, so we headed down to the coast where we were all from.
We left around 3 in the afternoon on a Thursday four of us in a beater car,and stopped for Chinese food in 100 Mile House.  I had a beer with supper, I can't remember if the driver did; it wouldn't have been more than one.  We kept on heading south passing Cache Creek on to the Fraser Canyon.
It was on the appropriately named Jackass Mountain that it happened.
As we proceeded on, going at or slightly above the speed limit, there was an RCMP cruiser parked along the side of the road.  As we passed it, somebody, maybe me turned his head to look back at it.  "Don't look back," said the driver, somewhat annoyed.  We all knew you never looked back at police cars because it invited suspicion.
Now we were all university or technical school students.  I became a doctor; I have lost touch with the other three, I am sure they all went on to become productive members of society.  We were just a little nerdy.  Our hair wasn't short but it wasn't that long.  And we were all white.
Within a minute of the look back, the cruiser was on our tail with the lights on.  We pulled over to the side and the driver got out his license and registration. As the cop walked over and stuck his head in the driver's side window I still remember what he said.
"You guys look suspicious, why do you look suspicious?"
He made us all give him our names.  I knew that legally I didn't have to do that but it was getting late and we just wanted to get down to the coast.  He asked a few questions about what we were doing and finally we were on our way.
At that time the Fraser Canyon highway went through rather than around every little town which of course meant slowing down from 80 km to 50 km, which most drivers didn't bother with.  So about 30 minutes later cruising through Boston Bar going with the traffic flow, our car , of all the cars going the same speed, got pulled over for speeding.  We figured the cop on Jackass Mountain had radioed ahead.
Because it was our driver's second speeding ticket that year, it cost him his safe drivers discount on his insurance, worth about $150 which he was a little pissed off about.  The other three of us suffered no consequences other than getting home a little later than planned.
I have thought often about that incident,  now almost 37 years ago, and how I felt and I can only feel sorry for those people for whom this is a weekly or daily occurrence.
Posted by Bleeding Heart at 5:12 p.m. No comments: