There is a Doonsbury cartoon about 30 years ago, based on Henry Kissinger's CABG surgery.  In the cartoon the surgeon is talking with Kissinger a day or so post-op.  He notes that during the surgery he was holding the heart of somebody who had condemned thousands to death.  He said, "Then I thought of my Hypocratic Oath and sewed you up".  Kissinger replies, "Good oath that".

A couple of months ago while working I went out to see a patient for a procedure.  His name seemed familiar so I thought that he might have been a patient I had seen before or even somebody I might have have met socially.  I asked him that and he said he didn't remember meeting me.

It was only after I put him to sleep that I realized the man who had placed his life in my hands was the insurance assessor I wrote about here.

I told the staff in the room about him and what he had put me through but at the end of the case I took him to the recovery room and went on with my business (I even gave him something for nausea) and presumably a day or so later he went on with his business and I hope to god we never meet one another again.
Posted by Bleeding Heart at 2:57 p.m. No comments: 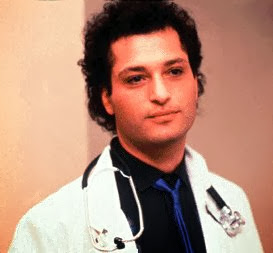 Posted by Bleeding Heart at 1:04 p.m. No comments: