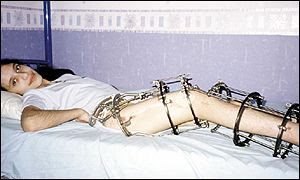 When I worked at the CoE there was a surgeon whose ego was the inverse of his height. Now he was not a modest guy so you can guess he was quite short. He compensated for this by wearing ridiculous cowboy boots with heel lifts and I know everybody (even some short people) made jokes about his height mostly behind his back. Now I am reasonably tall but I have come to realise that outside the NBA, NFL and CFL this is largely a world suited for short people so I couldn't really see what the "big deal" was.

Despite this surgeon's lack of physical attributes he had quite a successful life. (The operative word is had as I will explain below).

He became a successful surgeon, helped pioneer a few new procedures, was well respected in the community (if not by his colleagues), and was a successful political fund raiser for the ruling party. He was incredibly wealthy, had a huge house, and drove what he described as (after one of the nurses' daughters rear-ended him) the most expensive car in the province.

All was not rosy in his life. About 10 years ago he ran away from a long marriage to a woman who had put him through medical school, bore his children, etc to marry a sales rep. This didn't seem to affect his standing in the community, in fact even before he remarried he was in the social pages accompanied by his new wife-to-be. At his second wedding, his adult children from the first wedding picketed the ceremony and he had them arrested.

Now about 3 years ago I heard that he was going to take the whole summer off to have surgery. He was at that time of the age where people get prostate or colon cancer or require joint replacements so I didn't think much of it. That was around the time I left the CofE.

We were talking one day about him in the OR at my new place and somebody said that the reason he had taken the summer off was to have his legs lengthened in New York. The procedure had not been done. Just the fact that he had even considered such a procedure caused much amusement, although this would not have been out of character for him.

A couple a weeks ago someone came out and told everybody that he had actually gone ahead with the leg lengthening in the US. This is by the way called the Ilazarov procedure and is usually used for leg length discrepancy or occasionally for children of short stature. While this procedure is done on adults (particularily in adults who can afford it), there is generally a cut off at age 50 simply because you stop healing well, forming bone and rehabing well at that age. Being 50 myself, that is a little depressing. Apparently in the US, being able to afford a procedure can take years off your life (in both senses unfortunatley).

To make a long story short, he did terribly. His recovery was complicated by pulmonary emboli requiring an ICU stay, he has an infection, non-union and 60 year old nerves not liking being stretched, has developed causalgia which to my (and his?)relief is being treated by one of my colleagues and not by me.

Personally I blame myself. I should have never made all those short jokes.

But seriously....after the snickering about the shear audaciousness of a mature successful man undergoing mutilating surgery for a slight increase in his height, I really had to feel genuinely sorry for him. Not sorry for the predictable complications but sorry that he felt that his life was not perfect enough that he had to improve himself.

Another issue that came up is the issue of confidentiality. Yesterday in the surgery lounge this was the topic of conversation all day with people hearing the story and getting on the phone to someone they knew with, "did you hear about...".

Technically as a hospital patient, his condition should only have been known to his caregivers. While perhaps because of his actions over the years he has done more than most people to make his personal life less private, in his time of personal crisis, even if this came from a totally irrational decision on his part, he is entitled to privacy.

Still we all love gossip and this is a juicy story.
Posted by Bleeding Heart at 6:28 p.m.