I haven’t been blogging much lately.  Twitter has for better or worse become my forum even if I usually only comment on topics, like, retweet and occasionally forward articles to Facebook.  I only have a few hundred followers.

I got up this morning and checked my emails to find that my account had been suspended  for offensive content.  Further exploration found that this was due to a Tweet in a conversation about a month ago. 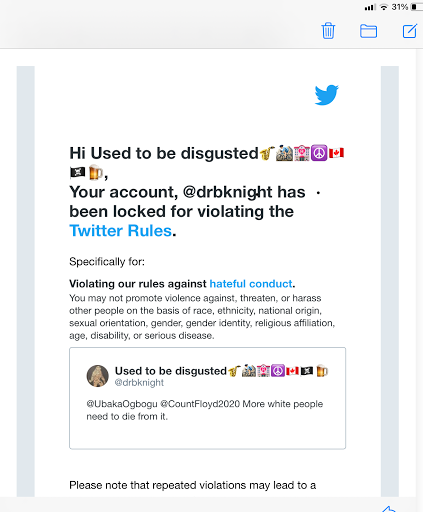 I got in a discussion about a potential malaria vaccine.  I made the flippant remark that more white people had to die for researchers to take malaria seriously.  This is not an original thought, I have heard the same said about Ebola.  We now have an Ebola vaccine and the research into this vaccine is one of the reasons why we have COVID vaccines sooner than predicted.  There were 2 other people in this discussion, one a local university professor who tweets and comments in public, the other was another physician who I know quite well and occasionally have coffee with, although not in the last 12 months.  It was pointed out to me that the life cycle of the malaria parasite is problematic for developing a vaccine, which I of course knew but I still think if we took malaria more seriously we might get if not a vaccine, treatments which are more effective and less toxic.

You could read the Tweet except as a condition of my parole, I had to delete it.

Anyway somebody, weeks after the post , reported me or maybe a Twitter algorithm picked this up, and I was suspended for calling for the death of an ethnic group.  This is of course a group that I was born into and still belong and I really have no wishes for any wide-spread cleansing of this or any other ethnic group.

I did appeal my suspension pointing out that my post was obviously sarcastic and not hate speech but Twitter quickly replied and told my post indeed was hate speech.  By that time by randomly “pushing buttons” I had figured out that if I deleted the Tweet my indefinite sentence would become finite, so I did that and I will be let back on sometime today.  In the interim I can still look at Twitter, I just can’t like, re-Tweet or of course post anything.

I do have strong opinions about things and I occasionally enter into discussions that begin to appear acrimonious.  This is strange because most of the people I follow on Twitter have beliefs quite similar to mine.  For example I recently opined that while balanced solutions like Ringers or Plasmalyte may not be as bad as Normal Saline, in the real world if you gave small amounts it really didn’t matter all that much.  This touched many people’s nerves apparently.  Yesterday I got into a discussion about shaming people for smoking which went off the rails pretty quickly.  Mostly when I enter a discussion it is to make a joke which some people occasionally find funny and even re-Tweet.

I really do spend too much time on Twitter; I realize how unhealthy it is,  however like many of my other unhealthy passions like beer, bacon and (as I found out a couple of years ago) biking I enjoy it to much to give it up.

If anything my cancellation has at least encouraged me to post to my long neglected blog.